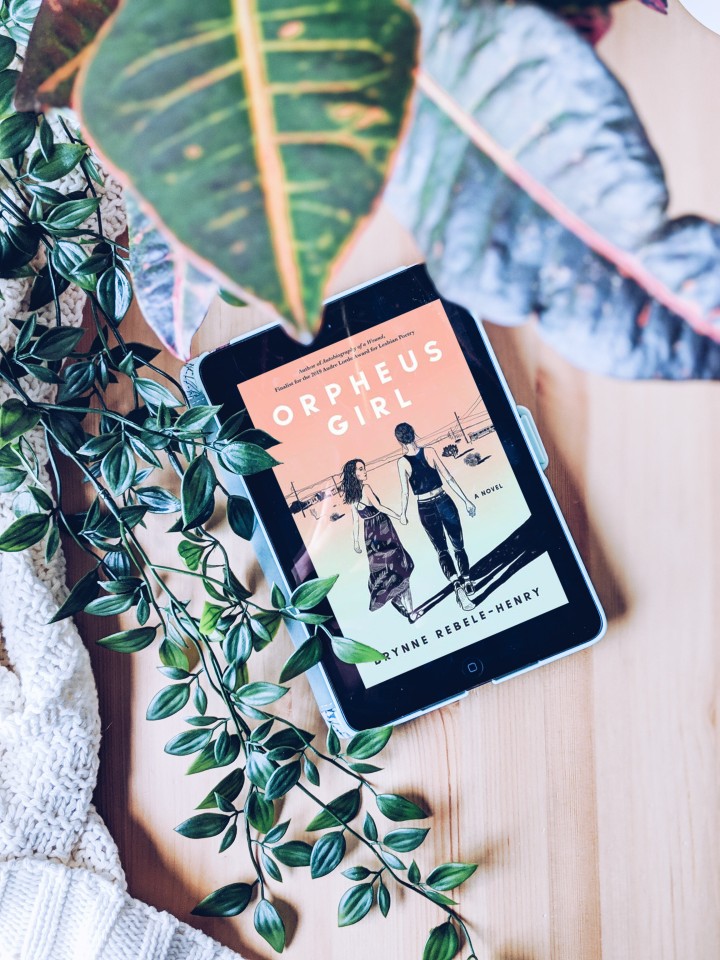 I received an Arc from Soho Teen via Net Galley, my thoughts and opinions are my own.

This is a debut novel by Brynne Rebele-Henry. Orpheus Girl is a re-imagining of the epic of Orpheus but between to teen girls in rural Texas. Brynne is an award winning poet, now I haven’t read any of her poetry, but I can say that for her debut novel I can tell that she has experience. I found her writing to be fluid and I found it easy to follow.

Our main character is Raya, depicts moments in her life where she comes to terms of her sexuality. The fear she feels, of being outed and disappearing like thought before her. Plus the feelings of being abandoned by her mother and the struggle of wanting to be accepted by her grandmother, even when she knows that that will never happen. She grew up in an environment where homosexuality is thought of as a sickness, something that can be fixed. The way Brynne depicts it, I can really feel the hate and unease the community feels. As well as the fear that Raya lives with.

Eventually the girls are found out and are sent away. When they are sent away we meet a cast of characters that are all different in their own ways. One character in particular I loved was Leon. Leon stole my heart the instant he was introduced. It was also in that moment that I did not want anything to happen to him and hoped the best for him and the rest of the kids in the story.

At the same time though I can feel what Raya feels towards Sarah. Sarah is her best friend and her first love. Sarah is the daughter of the town preacher. Their love is something that I feel anyone can relate to. We all know what that first teenage love feels like. That first love is universal, the feeling of butterflies in your stomach when you see that person that makes you feel seen. I really loved that connection between them and felt that Brynne did a good job

A quote that really hit me and one that I continue to think about even after finishing Orpheus Girl was “You know, the thing about family is that you can choose it. And I choose you.” When it comes to family I’ve always felt it is something that you can choose, creating that tribe that supports you and that you support.

“You know, the thing about family is that you can choose it. And I choose you.”

Overall I felt that the writing is good and that the story flows in a clear and intriguing way. By the end I felt that the story had a clear beginning, middle and end. I was also pleased with how the story ended and where we leave our characters. Orpheus Girl is set for October 8, 2019, when it comes out I highly recommend you give it a go. I have a feeling that a lot of people will connect to it.

Abandoned by a single mother she never knew, 16-year-old Raya—obsessed with ancient myths—lives with her grandmother in a small conservative Texas town. For years Raya has hidden her feelings for her best friend and true love, Sarah. When the two are caught in an intimate moment, they are sent to Friendly Saviors: a re-education camp meant to “fix” them and make them heterosexual. Upon arrival Raya vows to assume the mythic role of Orpheus to save them both and to return them to the world of the living, at any cost.

In a haunting voice reminiscent of Sylvia Plath, with the contemporary lyricism of David Levithan, Orpheus Girl is a mythic story of dysfunctional families, first love, heartbreak—and the fierce adolescent resilience that has the power to triumph over darkness and ignorance.

I wasn't always a reader, in the beginning there was a girl that disliked the idea and didn't understand the power of reading. Until I was given a copy of When the Wind Blows by James Patterson. It was that story that hooked me and made me understand the power of stories and what they can do for people. Why don't you join me on my travels?